If you know your way around with whole numbers and fractions, then it’s time to introduce decimal numbers.

What are decimals?
Well, decimal numbers, or as we shorter call them decimals, are a special form of fractions. Yup, you heard me right – fractions. They certainly don’t look alike, but they definitely are. As classic fractions, they represent “not-round” numbers.

You see, with regular fractions we had halves, thirds, sixths, 12ths etc. all kinds of denominators, but in decimals we operate only with 10ths, 100ths, 1000ths and so on – hence the name – decimal (from a Latin “decima”: a tenth part), i.e. a system based on 10s.

So they should actually be easier for you than the regular fractions. And the reason they might not look alike is because of their different way of noting.

To digress a little: similar is with percents. They are even more specific fractions. They are fractions stuck with a 100 as their denominator.

Pi (not pie) is a very famous decimal number. Let me show you on it the general idea about decimal place values.

Decimal noting is actually very useful as it simplifies a much more robust number notation. Let me show you on Pi.

You must agree that what’s on the left hand side of equal sign is much simpler than all that forest of fractions on the right.

A point (dot) is a separation point between whole numbers part on the left, and the fractions part (respectively 10ths, 100ths, 1000ths etc) on the right hand side.

This example, 2 wholes and 3/10, is represented by 2.3. We notice that there are no 10ths stated anywhere. That’s because they are already implied.

If you're interested in more of this examples - go to decimal to fraction conversion page.

We have to be aware that decimals are a combination of whole numbers and 10 based fractions. We also know that the bigger parts are always on the left hand side.

-  therefore the following 10ths on the right doesn’t matter

NOTE: As general rule of thumb – you align the dots and compare from left to right.

Now if this was the case: 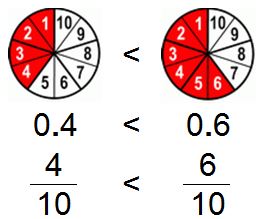 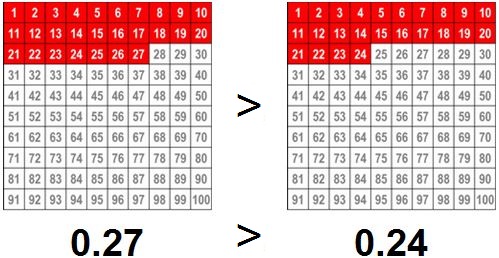 And a few more quick examples (maybe I over did it, but it’s better to be safe than sorry):

IMHO, it is best if you vertically align the numbers by decimal point. Then it’s clearer what you’re dealing with. As always we go from left to right.

Adding decimals is pretty much the same as adding whole numbers.

We do this because we want to add whole numbers with whole numbers, and 10ths with 10ths, 100ths with 100ths etc, and the vertical placement makes it easier for the eye.

After that you can even pretend like there is no decimal point at all.

So again there’s not much to say here if you know you way around with adding whole numbers.

Here are some basic examples. I’ll try to follow up with some worksheets soon.

To make things more obvious, there are no whole numbers in the following addends. I’ve made it as a little animation:

It’s even easier when we put the whole numbers part. Again if we imagine we’re dealing with whole numbers, it would be something like this (stare at the image below ;-)):

So, very similar, don’t you think?

If you really need additional help adding with this, I suggest you to visit my “vertical addition” page.

As with addition, there is not much to add other than it is almost the same as the classic subtraction. If you know your way around with regular vertical subtraction then this will be easy for you.

So, you align all decimal numbers vertically by its decimal point (dot), and then subtract as usual (with borrowing if necessary). After the above mentioned alignment you can act like there is no decimal point.

Ok, enough of this tail chase, let’s see some examples.
I won’t go into negative numbers yet, so these are only positive results.

These animated images are showing you that when you align the decimals by a decimal point, you can subtract the decimal numbers like regular whole numbers temporarily ignoring the zeros:

-          and then after getting our result we again divide by 100 (that means moving a decimal point back to its old place – two positions to the left):

Same thing here, you remove the decimal points and voila – you have a regular 2 digit vertical subtraction :

Now a more complicated example, but a same story. Remove the zeros and a decimal point and subtract. At the end you put them back in.

Don’t let the zeros scare you. Align the dots, remove zeros and do a classic subtraction kicks in.

We can see how it seems much harder when the numbers are not vertically aligned by dot. One can easily make a mistake and be confused. So, my advice to you is – always subtract decimals vertically.

-          we can completely separate this example because 30 is greater then 4, therefore there is no need for borrowing 10s from the blue part;

I guess I’ve complicated this enough. :-)

Well, I'm back. It's been a while since I've built a page. I hope you like this little help with decimals page.

Have your say about what you just read! Leave me a comment in the box below.

Have your say about what you just read! Leave me a comment in the box below.

Other Worksheets by Grades: